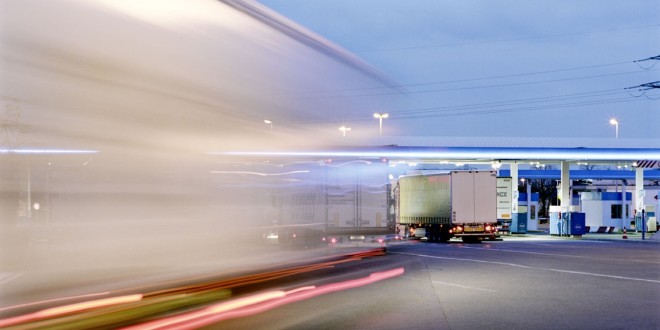 The future of truck driving

Platooning, the ability of trucks to travel close in convoy semi-autonomously, took a step towards reality in April with the staging of the European Truck Platooning Challenge 2016. The challenge showed that platooning and self-driving trucks are not something of the future anymore, it is becoming a reality.

How far are the developments? A self-driving vehicle is defined as “a vehicle that is capable of sensing its environment and navigating without human input”. The first self-efficient cars appeared in the 1980s and ever since, numerous companies and research organizations have developed working autonomous prototype vehicles.

In February 2015 the word “platooning” was introduced for the first time. The idea of platooning is to utilize the road better and save time, fuel and emissions. The concept is that the first truck does all the work and the trucks following automatically copy the speed. This ideally has results in safer and more efficient driving.

Self-driving trucks steer the vehicle independently, using cameras that build a real-time picture around the truck. The cameras look up to 250 meters ahead, allowing the truck to respond and drive by itself.

Where are we now? In April 2016, six truck manufacturers took part in the European Truck Platooning Challenge 2016, which is one of several try-outs with self-driving trucks. Simultaneous breaking, digital communications and lane departure warnings are among the tested technologies in these challenges and these need to be approved before the trucks can officially hit the road. But it won’t take long anymore – the technology is close to series production. Technology is ready, but are we? Obviously, technology is ready. But does that mean self-driving trucks are to be introduced on public roads next week? No. There are still hurdles left, such as cross-border rules and protocols for setting up platoons. Can convoys be established while already on the road or do all the trucks in the convoy need to have the same start and finish location? What are the responsibilities of the drivers in the following trucks? Technology being ready is not the same as legal systems being ready. A great deal still has to be sorted out in terms of legislation, liability and acceptance.

The development of self-driving trucks is at a point where it will not take long before they hit the road. The truck of the future will be efficient and save, while lowering the emission. Technology is ready and soon, we will be too.

Share
Previous What to do in case of a stolen or lost DKV Card?
Next Connect your Belgian toll box simply to DKV